Nationalist politics continue to gain support across the European continent, from the UK to Italy, France, Hungary and Poland. Meanwhile, the concept of “Europe” has become a rallying cry for those who want to resist what they see as a constraining, inadequate or conservative vision for the future.

Nationalist politics continue to gain support across the European continent, from the UK to Italy, France, Hungary and Poland. Meanwhile, the concept of “Europe” has become a rallying cry for those who want to resist what they see as a constraining, inadequate or conservative vision for the future.

Whatever else such a political picture may call to mind, it’s also a description of the state of philosophy across Europe in the early 19th century. During the 1830s and 1840s, nationalism and Europeanism stood for two sides in a struggle over the identity of philosophy itself. For the nationalists, Europe was an insult to be resisted. But for others, it came to represent a positive ideal for transnational collaboration and communication. And these debates still resonate in discussions of Europe today.

Their origins lie in the intellectual legacy of Johann Gottfried Herder, a late 18th-century German thinker of national cultures and ethnic origins. His influence had become particularly acute among the philosophers of Western Europe in the post-Napoloneonic era. His central idea resonated with many: that each distinct “people” is to be conceived as a natural community with a separate tradition that has organically developed its own ways of thinking.

This directly resulted in the emergence of national intellectual identities and stereotypes, which were reproduced, among other places, in the philosophy textbooks and journals of the day. Examples were the utilitarian British, the analytic, psychological French, or the high-flown, speculative Germans. These identities have sometimes surprisingly reversed and mutated over the centuries. For example, it is British rather than French philosophy that is now often seen as “analytic”. But nevertheless, the practice of stereotyping remains today.

Yet, by 1834, this nationalist model for different communities of thought had come under attack, for instance by Joseph Willm, an Alsatian philosopher stuck between the French and German traditions. He lamented in an essay on “The Nationality of Philosophies” that these national stereotypes stood in the way of the production of good philosophy. He wrote: “Never has there been less of a European philosophy.”

Willm went on to bemoan the lack of a common language that had served as the glue between intellectuals from around the continent in previous eras. It was this lack of a European philosophy, he continued, that meant: “The more national a philosophy, the narrower, more incomplete and thus further from the truth it is.”

But he saw hope in the blossoming relationship of two of the most celebrated and politically powerful philosophers of the period, the Frenchman Victor Cousin and German Friedrich Schelling. They corresponded on the possibility of a European rapprochement, one that would intellectually reproduce the kind of international dominance that, 20 years earlier, Napoleon had attempted to create through military might.

Similar ideas emerged during the 1840s among left-wing radicals looking for international co-operation as a means to prepare for a coming revolution – which eventually erupted in 1848 across the continent. 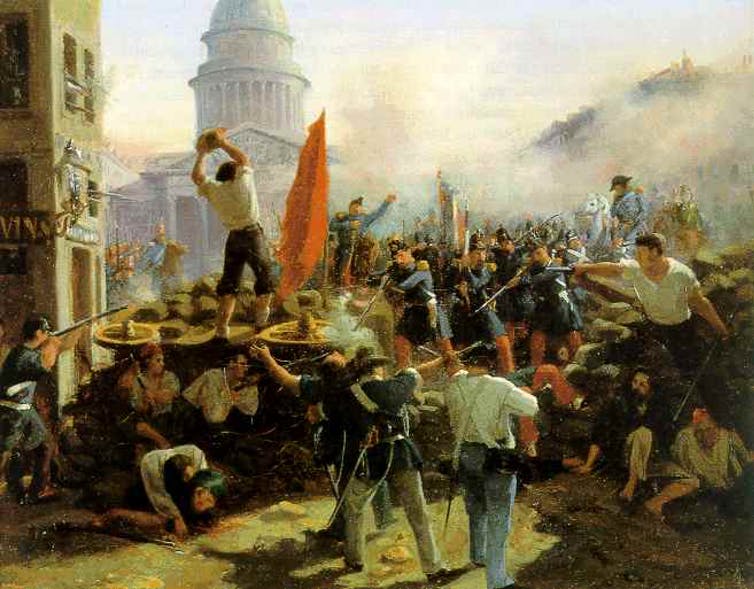 An age of revolution: barricade on the Rue Soufflot in Paris in 1848. Horace Vernet via Wikimedia Commons

In this vein, Louis Blanc, a French radical journalist who was to go on to become a member of the government of France’s Third Republic, wrote a treatise in 1843 arguing for an intellectual alliance between radical thinkers in France and Germany. Arnold Ruge, a former collaborator of the philosopher Karl Marx, responded to this treatise with another pamphlet renewing the call for European collaborations to bring about a revolution. Similar positive uses of the concept of Europe emerged among Czech philosophers, such as Bernard Bolzano, Ignác Hanuš and Augustin Smetana.

Retreating back to national stereotypes

Philosophers throughout this period sometimes represented themselves as French or British, or as European. And sometimes, they ambivalently flitted between the two and thought of themselves as both. For instance, in 1833, Cousin had an enthusiasm for Europe, encapsulated in his claim that:

There is nothing to fear from contact with philosophical schools that flourish in other parts of this great European family.

But this view soon encountered increasing hostility among his compatriots and forced him to beat a retreat into a patriotic thinking that celebrated French philosophical traditions alone.

In many ways, Cousin’s retreat from seeing European philosophy as a utopian solution to crises in thinking has been repeated by philosophers ever since.

Even today, teaching, research and writing on 19th-century philosophy in universities in Britain, Europe and North America is still – without fail – arranged into national schools such as “German idealism”, “British utilitarianism” and “French spiritualism”. Those philosophers who avoided these national traditions are forever overlooked.

In the end, the nationalism of the early 19th century didn’t just define the self-image of many a philosopher of a bygone era, but continues to determine how we think today about the geopolitics of thought. In particular, it shapes our collective failure to understand the ways in which our ideas and thinking are shaped by a European heritage. What we think and how we think it are not only determined by nationalist stereotypes. They also come by way of shared ideals and practices born out of a common European past that has gone on to shape the politics and institutions of today’s Europe.

By Daniel Whistler, Lecturer in Modern European Philosophy, Royal Holloway. This article is republished from The Conversation under a Creative Commons license. Read the original article.