Our new research is tracing the development of the world's vital non-living nature.

Our new research is tracing the development of the world's vital non-living nature.

The health and wellbeing of humans is underpinned by the natural world. Living nature in the form of ecosystems and biodiversity is the world’s life support system. It is crucial, but under threat.

Equally important, but less discussed, is non-living nature or “geodiversity”. This includes rocks, soils, water and landforms. Our new research discusses how all of nature – including the non-living – must be explicitly considered in policy if a sustainable world is to be achieved.

Nature is complicated and interconnected. The ecosystems, geosystems and climate conditions upon which humans and all other species rely are intricately related to one another. For scientists to understand these systems, they must monitor them consistently across the world and through time. This allows change to be detected and communicated so that suitable policies and laws can be created and enforced. Society needs this interconnected system to work properly to protect endangered and dwindling resources.

By failing to sufficiently account for geodiversity alongside other aspects of nature, society will fail to protect the very systems that are needed for a sustainable and habitable planet. Our study discusses how, despite severe threats and widespread changes, geodiversity is being overlooked in policy and international conventions.

One problem is that we simply don’t have sufficient information to assess changes in geodiversity and associated resources on global and national scales because everyone measures it differently – if at all – and geodiversity data is not shared internationally. That is why we are building a database of “Essential Geodiversity Variables” (EGVs) to help better monitor the Earth’s fragile geosystems.

So, what is geodiversity?

Geodiversity relates to the physical land surface and subsurface of the planet and its spectacular array of processes and materials. Rocks, fossils, minerals and soil play a hugely important role, as does hydrology in the form of oceans, lakes, rivers and groundwater. Landforms such as hills, valleys, mountains and geomorphological processes (such as weathering and erosion) also make up Earth’s geodiversity. 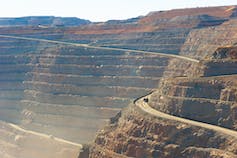 It is a key component of the natural world, alongside biodiversity and the climate. It provides a range of things humans need, from the rare elements required to make our smartphones and renewable energy technology, to the soil that is needed to grow crops. It makes up the rocks that filter our water and the landscapes that support our ecosystems.

But key elements of geodiversity are widely over-exploited and internationally under-regulated. This results in damage to geosystems and ecosystems and even violates human rights. While the perils and ubiquity of over-exploitation of freshwater are relatively well known, others are less obvious. For example, forests are threatened by sapphire mining in Madagascar and bauxite extraction in Ghana.

Such mining activities can increase local conflict. This was the case in eastern Congo where global trends in mineral prices are thought to have increased armed clashes around mines digging for gold and “3T minerals” (tin, tungsten, and tantalum). These minerals are required for manufacturing the electronic products that have become so fundamental in our lives.

It is not just mining that can have negative impacts, though. Over-exploitation of soil is a global problem – more than half of all fertile topsoil has been lost in the past 150 years amid widespread degradation. Meanwhile, sand has been considered a virtually infinite resource by many and extraction is not regulated internationally. But over-exploitation of sand for construction is now recognised as a crisis.

Our research around the sustainability of geodiversity builds on the growing body of work from geologists and others including Iain Stewart and Joel Gill and Jose Brilha). This work highlights the fundamental importance of geodiversity in sustainable resource use and overall human wellbeing.

Areas with high geodiversity are also likely to be very important for biodiversity conservation as the global climate changes. Indeed, geodiverse areas provide a wide variety of environmental features that can support many different species and act as buffer against environmental changes.

Our Essential Geodiversity Variables (EGVs) framework follows on from similar approaches for biodiversity, climate, oceans and sustainable development goals. These all aim to provide the tools and data necessary to effectively and consistently monitor important aspects of the world. In doing so, these frameworks make the information accessible to policymakers, stakeholders and the public. Following these guidelines and using the tools developed will ensure that the information we collect allows us to reliably spot and research change. We can then plan and respond accordingly.

By combining measurements on the ground with the vast amounts of remote sensing data from satellites, aeroplanes and drones we are now able to map and track the world’s geodiversity in space and time.

EGVs therefore inform us about the Earth’s surface and sub-surface and how these are changing. For example, how much sand is there in a given place and how is the volume changing? How quickly is soil eroding? How are groundwater resources changing in quantity and quality? Our forthcoming website will provide information on how to collect EGV data and provide case studies and a platform for interaction.

This monitoring is vital for scientists and decision makers across a whole range of fields and marks a huge step forward in terms of effectively measuring the non-living but essential natural resources on our planet.

By Joseph J. Bailey, Lecturer in Biogeography, York St John University and Franziska Schrodt, Assistant Professor of Biogeography, University of Nottingham. This article is republished from The Conversation under a Creative Commons license. Read the original article.