The results highlight mental health inequalities that were present before the pandemic. They just didn't get much attention outside the mental health community

Between 23 and 30 April 2020, one month after the lockdown was introduced in the United Kingdom, 17,452 people responded to the online survey out of a total study population of 42,330 used the 12-item General Health Questionnaire, which is a validated tool for measuring levels of mental distress, and a new paper details the non-immunological effects of government lockdown.

The study reveals that some mental health inequalities that were present before the pandemic have widened. The increase in mental distress was greater among women than men (women: average adjusted increase of 0.92/36, men: 0.06/36), and in younger age groups than older people (16-24 year olds average adjusted increase: 2.69 points, 70 and over average increase: 0.17 points). People living with young children showing greater increases in mental distress than people from child-free homes.

The researchers say the increase in mental health distress in April 2020 may represent a spike in emotional response that might have stabilised or reduced as people adjusted to the restrictions imposed on daily life. However, as the economic fallout from the pandemic progresses, when furloughs turn into redundancies and mortgage holidays time out, the researchers say mental health inequalities will likely widen and deepen and must be monitored closely so that steps can be taken to mitigate against a rise in mental illness in these groups.

Participants are asked to reflect on the previous two weeks and report how often they have experienced symptoms such as difficulties sleeping or concentrating, problems with decision making or feeling overwhelmed. Each question is rated between 0 and 3, giving a total potential score of 36, where higher scores represent higher levels of mental distress. The researchers defined a clinically-relevant threshold of mental distress as experiencing four or more different symptoms at a higher level than usual. This was used to calculate the proportion of respondents experiencing clinically-relevant levels of mental distress. 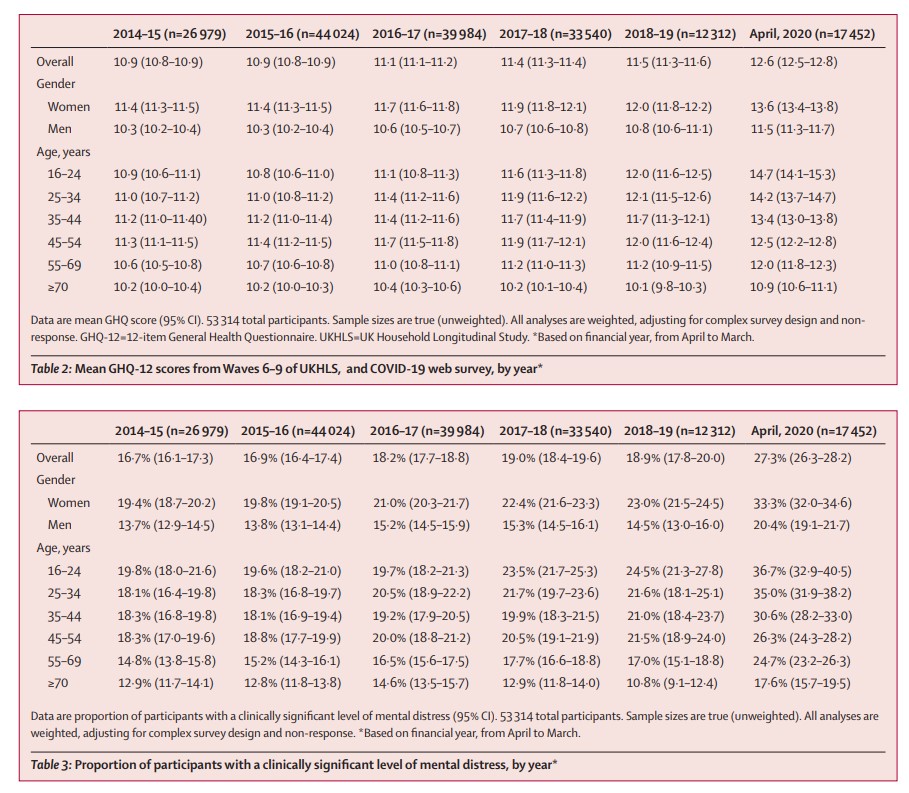 The inequality was known before the pandemic but not well-publicised

The results highlight mental health inequalities that were present before the pandemic. Women had higher levels of mental distress than men on average (women: 13.6/36, men: 11.5/36). When comparing data from individuals from before and after lockdown and adjusting for prior trends, women also showed a greater increase in mental distress (women: average increase of 0.92/36, men: 0.06/36). Around one in three women had a score above the clinically-relevant threshold compared with one in five men (women: 33.3%, men: 20.4%). However, the researchers say mental distress in men may be more likely to manifest in ways not captured by the General Health Questionnaire, such as alcohol misuse, and further research is needed to examine this.

When scores from individual participants were compared before COVID-19 and in April 2020, the greatest increase in mental distress was seen in young people aged 18 to 24 (average increase of 2.69 points) and those aged 25 to 34 (average increase of 1.57 points), after adjustment for prior trends and other factors.

Other mental health inequalities that were present before the pandemic persisted, but did not widen. People living without a partner (13.8/36) and those with a pre-existing health condition that would make them more vulnerable to COVID-19 infection (13.7/36) had higher levels of mental distress than the average population (12.6/36). However, comparison of individuals’ responses before and after lockdown did not reveal a larger than average increase in mental distress for these groups.

Mental distress was more common among people living in low income households (average score 13.9/36 in households of lowest income, compared with 12.0/36 for highest income homes). In addition, people who were unemployed before the lockdown had higher mental distress scores than those in employment (unemployed: 15.0/36, employed: 12.5/36).

However, the increase in mental distress relative to prior trends was greater among those who had jobs before the pandemic (average increase 0.63/36 points for employed vs -0.48/36 points for unemployed, after adjusting for other factors). This group includes those who may have been furloughed, lost their job or worried about losing their job, as well as those shifting to working from home. The researchers say this trend should be monitored closely as the effects of the pandemic on employment take hold and expected redundancies come to fruition.

There were too few responses to examine changes in mental health within ethnic groups from before and after the pandemic. However, average mental distress scores were higher for Asian people than white British (Asian: 13.7/36, white British: 12.5/36), but the the study was not powered to detect a change for other ethnic groups.