Coronavirus: How Much Risk Do You Take Getting On An Airplane?

Pedestrian dynamics models can show how to reduce the risk of disease spread in airplanes.

Airplanes have a reputation for spreading germs and it makes sense when there are 150 people in a small tube with recirculating air 16 inches from each other for extended periods. But some risks are more than others. The tray table you eat on likely has more risk of disease than the bathroom.

It's a SARS-CoV-2 world so people are thinking about an increased risk for contagions in a way few did during previous recent coronavirus pandemics like SARS or MERS. A new paper tackles the problem using pedestrian dynamics.

Scientists have long used the SPED (Self Propelled Entity Dynamics) model, a social force model that treats each individual as a point particle, analogous to an atom in molecular dynamics simulations. In such simulations, the attractive and repulsive forces between atoms govern the movement of atoms. The SPED model modifies the code and replaces atoms with humans. Professor Ashok Srinivasan of the University of West Florida and colleagues used the SPED model to analyze the risk of Ebola in 2015, and found that the SPED model is so slow it is difficult for nimble decision-making. U.S. President Donald J. Trump made the decision early to restrict air travel and critics said he was over-reacting but so far America has had far fewer deaths than Italy, Spain, or China. The new model might make future decisions more evidence-based than hunches.

The authors believe their CALM model (constrained linear movement of individuals in a crowd) may be better. CALM produces similar results to SPED, but is not based on molecular dynamics code so it is both faster and tailored better to movement in narrow, linear passageways. It's almost 60 times faster.

It isn't feasible to make precise predictions when there are many variables, like during the early stages of an epidemic so a large number of possible scenarios to cover the range of possibilities must be generated. The team validated their results by examining disembarkation times on three different types of airplanes. Since a single simulation doesn't capture the variety of human movement patterns, they performed simulations with 1,000 different combinations of values and compared it to the empirical data.

The team used the Texas Advanced Computing Center's Frontera, the fifth most powerful supercomputer in the world to get the computation time down to 1.5 minutes. 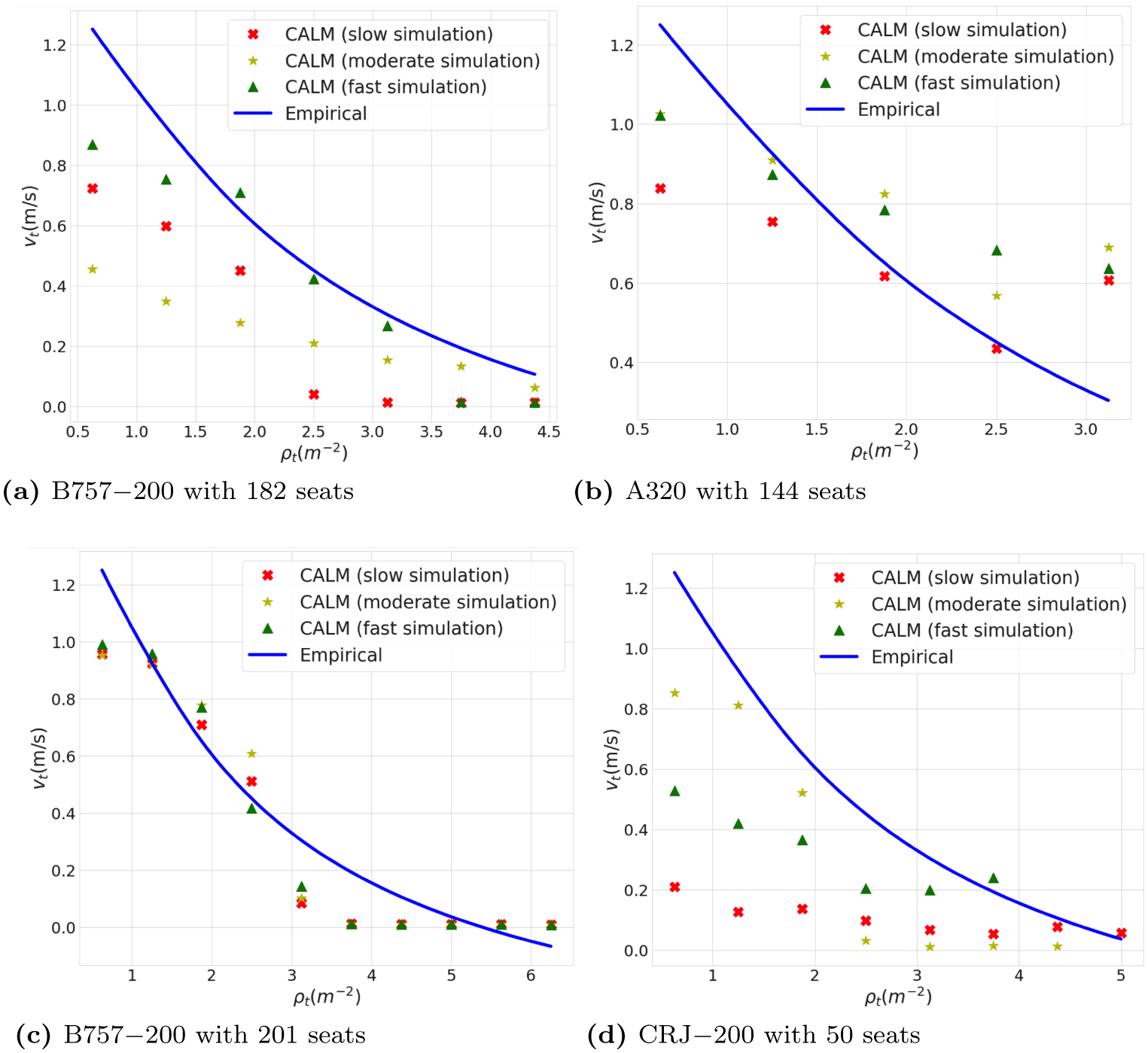 Though there have been thorough empirical studies on several flights to understand human behavior and cleanliness of the surfaces and air, a major infection outbreak is an extreme event and parameter-based models may not capture it. If they did, SARS-CoV-2 would not have spread but since it is in the same virus family as the common cold, no one anticipated this mutation.

That, coupled, with about 100,000 flights on an average day, made it a very low probability event that led to infection outbreaks just because the number of flights is so large.

"It's generally believed that infection spread in planes happens two rows in front and back of the index patient," says Srinivasan. "During the SARS outbreak in 2002, on the few flights with infection spread, this was mostly true. However, a single outbreak accounted for more than half the cases, and half of the infected were seated farther than two rows away on that flight. One might be tempted to look at this outbreak as an outlier. But the 'outlier' had the most impact, and so people farther than two rows away accounted for a significant number of people infected with SARS on flights."

Currently, with regard to COVID-19, the typical infected person is believed to sicken 2.5 others. However, there have been communities were a single 'super-spreader' infected a large number of people and played the driving role in an outbreak. The impact of such extreme events, and the difficulty in modeling them accurately, makes prediction difficult, according to Srinivasan.

"In our approach, we don't aim to accurately predict the actual number of cases," Srinivasan said. "Rather, we try to identify vulnerabilities in different policy or procedural options, such as different boarding procedures on a plane. We generate a large number of possible scenarios that could occur and examine whether one option is consistently better than the other. If it is, then it can be considered more robust. In a decision-making setting, one may wish to choose the more robust option, rather than rely on expected values from predictions."

If you are flying, try not to have the air vent blowing on you. In Singapore, an exhaust air vent of a toilet used by a patient tested positive for the new Coronavirus and scholars attributed it to air flow.

move away from those that are too close.

move toward those that are far away.

match the direction of the movement of their neighbors.

That is not going to be possible on a plane, but if you are at risk, it's wise to not touch your face or to wear a mask. Any mask. Don't worry about N95 or any other rating, 34 papers show all masks are good masks.